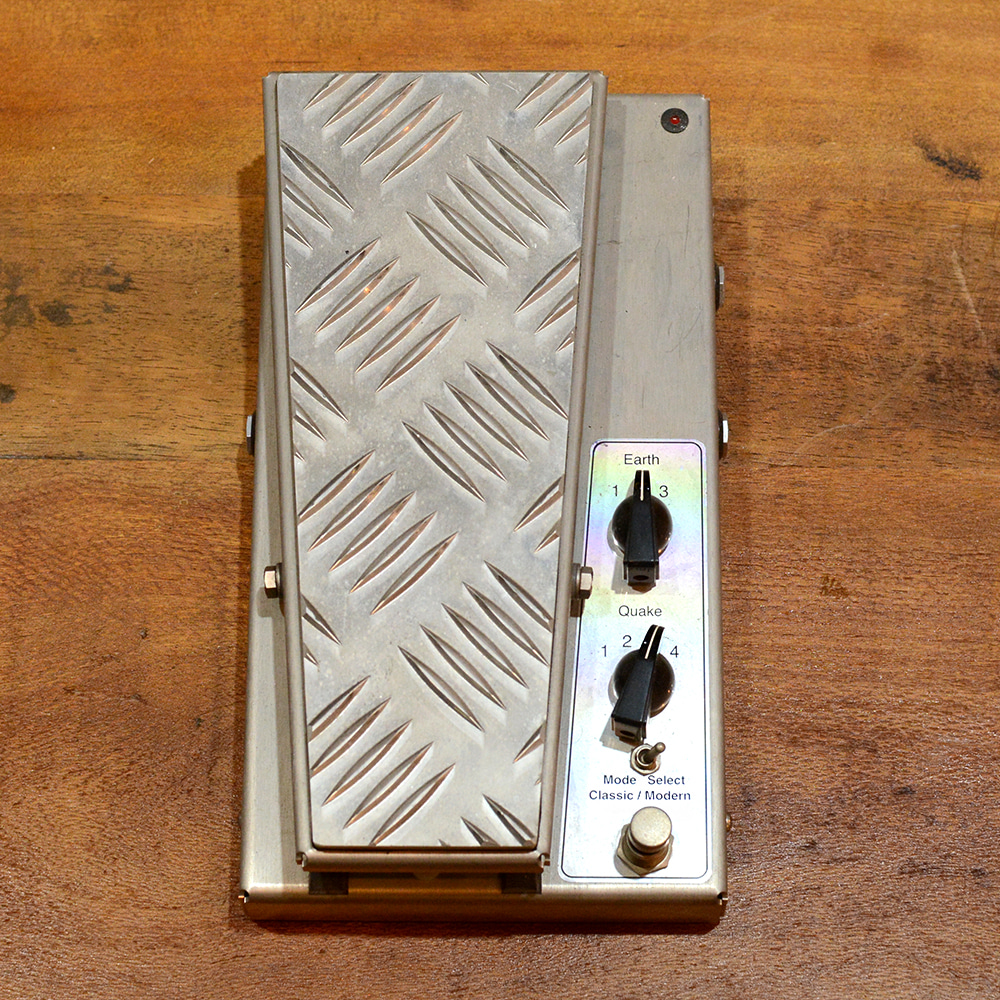 The all-new SM-2 Silver Machine Revolution Guitar Wah represents the pinnacle of functionality and design excellence in the field of wah wahs. Instead of copying vintage units, designer Hardy Kurandt has effectively created a unit that will provide the user with truly inspirational performance.

The SM-2 features A striking 14-gauge, road-worthy stainless steel chassis that protects its hi-tech circuitry and premium quality components from harm. Three switchable frequency bands and four switchable filter bandwidths provide the user with 12 distinct wah effects. Switchable Classic (wah only) and Modern (wah & dry mix) modes with adjustable effect blend allow for further sound variations. By manipulating these controls a dazzling array of effects can be achieved, from standard wah sounds to tremolo, phasing, vibrato and even tape reverse simulations. The footswitchable "Continuous On" mode allows for use of the SM-2 as a static filter to accentuate specific frequencies, further increasing its versatility.

Now available with the all new, patented "Automagic" pressure-sensitive activator pad, the Silver Machine Mark II is even easier to operate than before. Simply step down on the treadle to engage the effect, then step off to disengage. The new Automagic activator requires less pressure than previous versions, making activation even easier and more accurate than before.

Each SM-2 is painstakingly hand-built in Germany to the exacting specifications of designer Hardy Kurandt and comes with a one-year parts and labor warranty.

Sound Quality: 10
I'm sorry, but anyone who finds this pedals sound quality to be bad really doesn't have any ears. I could see if you're looking for standard Crybaby type tones than this probably won't be your bag - but if that's what you want, go get a Crybaby and sound like everyone else. The Silver Machine excels at really unique wah tones and the controls offer a very wide variety of sounds - sometimes it's like a synth filter, other times like a manual phaser, other times very akin to a classic wah tone. The Modern mode is a HUGE benefit - adding dry signal in against the wah tone really helps fill out the sound. I'm floored by the amount of sounds this unit can create - a wah for the creative musician, not for those who are looking to sound like everyone else.

Overall Rating: 10
Again, this is a pedal for player's looking to expand their sonic boundaries, not limit them. It's built great, has a ton of useful features, and a cornucopia of interesting tones. It wasn't cheap, but I believe it's worth it to pay more for something that will help you stand out from other players. I guess I would replace it if lost or stolen, I hope this doesnt happen though!

Overall Rating: 10
I'm a professional guitar player, playing nearly everything and everywhere I get paid, from punk to disco, metal to classical, artsy music, jazz, fusion, you name it, I try it. I play everywhere from theaters to the last biker bar, from huge open air festivals to small clubs, from quiet to extremly loud, and Silver Machine has worked everywhere I put it, in erey circumstance. I've been playing for more than 25 years now, making a living of it for 15, and like I said, I have used nearl every wah on the market, and they all seemed to break down after some months, so I decided to buy the most expensive and see what happens. I'm very satisfied as far. If it was stolen, I'd buy another one immediately.